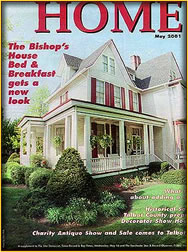 EASTON – The Bishop’s House Bed and Breakfast has always been known for its Victorian charm and today, it is even more so. In late 1986 the house was purchased by its current owners, John B. Ippolito and Diane Laird-Ippolito who undertook to restore the building to its original grandeur. The owners are now ready to share it with the public.

“I love the house,” said Diane Laird-Ippolito. “This is what I have dreamt about. This is my obsession – even after all this time. She has a personality, a warmth.” Every year, the Ippolitos have embarked upon a new project, and any profit made on the Bed and Breakfast goes into the restoration fund.

This year’s project was to replicate the ceiling medallion from the large drawing room and replicate it in the dining room. The original medallion fell down many years ago. Back in 1987, this process was done for the small dining room. In the east drawing room, the ceiling medallion needed to be reattached. “The only thing holding it up was the gas fireplace,” remarked Mrs. Ippolito. Over the years the plaster just let go. “It is, after all, over 100 years old. I was told that when the original fell in the small drawing room, it could be heard for a two block radius.”

All the detail work was done freehand. Robert Medura was the journeyman and plasterer. Cynthia Miles did the decorative painting, stenciling and freehand work. The ceiling medallions are something truly unique to the house and not an easy task to make. “This is plaster, not wood,” said Miles. “You can make it as complicated and individual as you wanted. You don’t see plaster very often. It’s an art form.” While the work was being completed this year, the Bed and Breakfast was closed for three months. Certain parts of the building were sealed off to keep the dust confined to the work area.

In the entrance hall, top crown molding and frieze were added. The wood molding and ceiling were removed. The ceiling (medallion) crown molding was a new addition this year.” This home is from the 1880s time frame, so it’s very appropriate for this house,” said Diane. The frieze portion of the molding is a copy of (one found at ) the treasury building in Washington, D.C. The bottom section of the molding in the entrance hall is a replica of what is in the rooms. The Ippolitos are delighted with the decorative plasterwork done so far.

“We are (very) pleased by the plasterer,” said Diane. “Robert has been consistently available. Not many people cannot do that type of work. It really is an art form.” Once the plastering was complete, it was time for Miles to add the final touches.

“Cynthia then came in to do her magic,” said Diane. “It’s wonderful to watch her work. She is extremely talented.” Miles is used to making peoples’ dreams a reality, and she accomplished this at The Bishop’s House. Using feathers, Q-tips, paint brushes, sponges, cheesecloth and her fingertips, Cynthia painted the rooms. In the small room, she put five layers on (the mantle) building upon each layer, and added decorative touches to the dining room (walls), and ceiling. Then she worked on the molding in the dining room. Also in the dining room are detailed colored sketches of the four seasons and an expansion of the deer theme which is shown on the head of a piece of furniture housed there. Miles believes that repeating a design makes it stronger. Miles has done extensive work at Bishop’s House over the years. The mantles of the working fireplaces in each of the first floor rooms reflect the Victorian faux finish process. Her color scheme includes Serpentine in the dining room and drift marble in the small drawing room and mahogany in the east drawing room. The tile surrounding the fireplace in the east drawing room is a reproduction Victorian pattern. For Miles, the entire project has been a joy. “Not many people have a Victorian house or have the vision to do the restoration you’ve been working on for so long,” Miles said to Diane.

Future plans include adding gold leafing to the crown molding in the east drawing room. This is otherwise known as Fleur-de-lis, or stenciling on the wall. Miles will use the “Flower of the Lily,” a symbol from the city of Florence. The design is done in a diapres pattern, where the lines go diagonally, touching at the intersecting lines. It is typical for dishes and wallpaper design.
“It will work like a whole design to you because your eyes naturally fill in the spaces,” said Miles. “It’s been around since the 14th century. It’s a common, decorative note to include this.”

The Bishop’s House is more than halfway through the original 20-year restoration plan. The wallpaper has been striped, the moldings repaired, the floors refurbished, two bathrooms were added with whirlpool tubs, a commercial kitchen was added and a sprinkler system was installed.

Other work included adding a new roof, remodeling second floor guest rooms, replacing windows, putting railings on exterior steps, replacing metal pipes with wooden banisters and railings, adding ductless air-conditioning in the guest rooms, and beautifying the landscaping. The chimneys were refilled and one was taken down and rebuilt. Also, all of the flues were redone on all six fireplaces. “If you have that many fireplaces, they need to work,” said Diane. One of the toughest tasks performed was replacing the sewer line. Although it was working fine, the owners were concerned there might be some backups due to the age of the system. They also replaced the underground oil tank because they didn’t know how old it was. “We do a lot of preventative measures,” said Diane. “We were concerned with the EPA and potential leakage, because that all goes into the Bay.”

Next year’s project is to replace 10 more windows. At some point the owners hope to get rid of the window units in all the guest rooms and add ductless air-conditioning. Other items on the restoration plan include restoration of the plaster walls in the 3 1/2 story hallways; adding period draperies and upholstery throughout the house; and adding a wrought iron fence and gates to the exterior landscaping. When all the work is done, the Ippolitos will petition for Bishop’s House to be placed on the historic properties list.